On my last yarn-purchasing excursion, I requested that my husband select a Zauberball or Crazy Zauberball from the shop’s selection. He’s always game for more socks, and I was really interested in working with a yarn that had the gentle colour changes that the aforementioned yarn is known for. 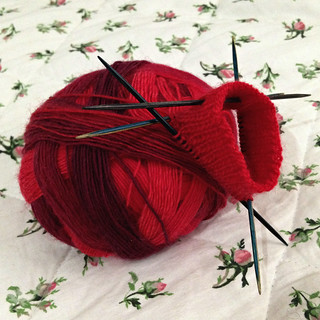 Initially I planned to knit a fingering-weight adaptation of the pattern Rye by Tin Can Knits. That’s what I had in mind when I cast on these socks and started with the ribbing. As the yarn started to transition into a darker colour, however, I didn’t feel at ease with my pattern choice. Even with the garter stitch section of the pattern (and I do adore garter stitch), I worried about being bored with the look of the socks. I browsed through a few patterns, specifically searching for those designed for or completed by people using Zauberball, and found the Magic Zauberball Stripe Socks by Tofutrulla. This pattern is not complicated or exacting, and the sock is stockinette, but the colour-changing stripes really appeal to me. I was just about finished with the ribbing on the sock I had begun, so there was no need to rip anything out, only to do something different going forward. 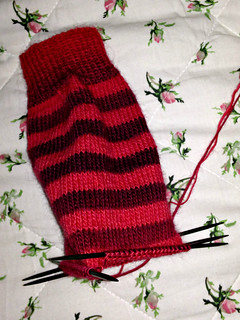 I dragged out the scale, separated the yarn into two balls of equivalent size, and started striping…and I love it! I’m sure there will be an area where both stripes are almost the exact same colour, but hopefully that won’t really bother me. I feel like the stripes knit much faster than a plain sock; there’s something about being able to track the progress in terms of visual queues that helps avoid that sinking “endless project abyss” feeling that I dread. I’m curious to see how the pair looks when both socks are finished, since they won’t match in much more than spirit.