I continued working on the over-ambitious baby dress… and I finished it at the last possible moment that I could do so. I was that person at the birthday party with an unfinished project in her tote bag, sitting at the table and sewing nonstop.

There was a significant amount of “knitting black hole” for the skirt portion of the dress. I could see that I was knitting a round and then another, but the progress didn’t actually appear to exist when I measured it. I finished the body of the dress the day before the party and crocheted on the trim. Then I washed it and laid it out to dry while crocheting the flowers it is embellished with. My original plan was to have the darker colour at the center of the flowers and the lighter colour at the outer edge. I reversed the order when assembling the flowers and didn’t have time to go back. I stayed up extremely late working on the flowers. 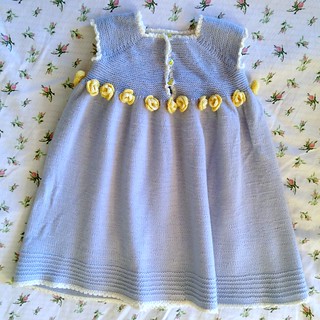 I thought I could sew them on in the morning before the party, but I didn’t have time to weave in the ends. My flowers are spaced with a greater density on the front than on the back. I only made 24, as the pattern mentioned, because I just didn’t have time to make any more. I wanted them to be very close on the front portion. I opted for buttons with little ducks on them because the birthday girl likes duckies. It took me basically the whole party to weave the ends in. But at last, it was done! ♥

I am not the only knitter with unrealistic goals, but that doesn’t necessarily make the experience of being trapped in a yarn vortex of my own design any less stressful. I attended Vogue Knitting Live! Chicago 2015 during the first weekend of October, and had the opportunity to see the yarn kit YarnHarlot made this darling baby dress from–including the dress design on display–at the StevenBe booth. This planted an idea in my mind to knit this dress, but with different colours. I looked up the materials and pattern online, and eventually decided to place my order. Shortly after doing so, I realized that I had to have the dress finished by October 18th. The yarn arrived October 9th.

For some reason, the thought of deciding to finish on this project later and going out to buy a present of some kind is totally unacceptable to me. I’ve reached that point of “knitter’s delusion and stubbornness” that is very difficult to rationalize with.