These aren’t necessarily one of my “longest” projects, but I’ve been working on these mittens off-and-on for a few months now. I’ve taken a number of breaks to work on things such as Mother’s Day gifts, etc. Now that the weather is generally warmer (although it keeps taking a few dips into chillyness, brr!❄️) I’m not as motivated to work on warm hand coverings like mittens… but I also don’t dislike this project, so it’s not torture.

The mittens themselves were finished at the end of April for the first and the end of May for the second. After seeing the Northman Mittens with their cozy alpaca lining, I knew I wanted mittens for myself with cozy alpaca lining. (And it just so happened that I had some appropriate alpaca yarn that I bought from another Ravelry user in the fall of last year!) I’ve never knit lined mittens, but it was easier than I thought–or so I think, I guess, until it’s time to turn the lining into the mitten. That will really be the “moment of truth”!

I decided to knit the thumb of the lining before finishing the rest. I thought it would be easier to weave the ends in. (And I’m glad I did, because it was!) I fiddled some weird increases and decreases for the thumb–they’re not pretty, but it impacts the fit in a good way. I’m not really a fan of thumbs without gussets, so even though the outer mitten lacks a gusset, I tried to insert a small gusset to the lining to avoid too much stretch and wear around the thumb area. I’m really curious to see how it works out~! ♥

I actually thought that I’d be posting about another project that I’m working on right now, but those mittens reached a point on Tuesday where they were finished with one step and ready for blocking. They were still wet on Wednesday, so I couldn’t do any other work on them. Instead, I wound up working on a hat with the goal of using up some leftover yarn. I don’t like having leftover yarn, but I do like making hats. ★

I decided to crochet instead of knitting, so I picked a hat pattern accordingly. I searched in Ravelry, and the image of this hat caught my eye (and met my criteria for yardage, etc.), and when I saw it was a pattern from moogly that seemed an even better reason to pick it! ♥ (Lately I’ve really been enjoying some of the patterns and tutorials from moogly.) I actually started it on Tuesday, but I didn’t get any farther than the increases for the crown–I was left with a big potholder-looking item at the end of the evening.

END_OF_DOCUMENT_TOKEN_TO_BE_REPLACED

I don’t knit for the holidays every year, but I’ve decided to do so this year! I already got a head start with a hat and cowl set, and I’ve mapped out that I needed to create the following: 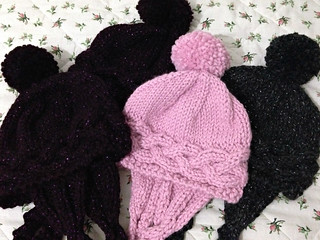 I took advantage of a yarn sale to pick up super bulky yarn (Lion Brand Wool-Ease Thick & Quick) for 4 of the 5 ladies’ hats. It’s one of the acrylic blends I dislike the least, and ease of washing matters for a few of these recipients. I used the pattern Free Rapunzel! because I had so much fun making one for me. Whipping up these hats wound up being just about as entertaining as the first one was. It’s so quick and easy, and I love the look of the all the braids. It’s really only cutting through the pompoms that I don’t enjoy; the scissors hurt my fingers. x_x