Generally speaking, I try to avoid having too many projects in-progress. I don’t like thinking about all those things that I’ve started but haven’t finished yet. Unfortunately, right now I have quite a few WIPs–many more than I would prefer to have ongoing. It might not be very many for others knitters and crocheters who live for the thrill of a new project, but it’s too many for me. Unfortunately, I’m not at a good point to finish any of them up!

My oldest WIP is from July 2014–the tiny wild rose hand puff. It’s a Tiny Owl Knits pattern: tiny violet hand puff. I haven’t made any progress on this since April of this year… because I ran out of yarn and haven’t bought more. It’s easy for me to stall when I have a project that needs more yarn, since I’ve been trying to work down my stash of yarn. I know that it probably would be a good idea to buy more yarn and finish this, but every time I start to buy the yarn I need I can’t go through with it.

That’s the same problem I’ve had with this other muff: forest leaf muff. It dates from the same period as the other hand-cozy, although it’s been on hiatus longer. I also ran out of yarn and haven’t had the motivation to buy more.

END_OF_DOCUMENT_TOKEN_TO_BE_REPLACED

I took a brief hiatus on my projects for a few reasons. The weather over here spiked to fairly high temperatures and some unpleasant humidity. This absolutely kills my desire to knit or have yarn touching me, especially because I don’t have air conditioning in my home. My schedule involved a number of events and activities that made getting some knitting or crocheting time more difficult–including an amazing overseas vacation that I did not want to bring yarn with for. I like packing light, and a blanket like this is not light. I had also never traveled internationally before, and I was very worried about getting things confiscated at the airport. To have peace of mind, I left all the yarn at home.

Before I left I did some intermittent work on the blanket. (It reached the “yarn black hole” stage where I could physically see that I was doing things, but it didn’t appear to actually use up any yarn. This of course meant that when the stage ended I was suddenly very low on yarn and realized it would be wrapping up soon.)

END_OF_DOCUMENT_TOKEN_TO_BE_REPLACED

It’s been very warm lately–even though it’s a much milder summer than previous years. Somehow, on these incredibly warm days (they feel even warmer than they otherwise might; I don’t have air conditioning) all I can think about is making a blanket. I’ve been fixated on making a blanket since the temperature spiked. (Maybe all the weird weather stuff has broken me.) I wanted to start a blanket so much that I contemplated buying yarn for such a project, even though that goes completely against my plan to use my stash.

END_OF_DOCUMENT_TOKEN_TO_BE_REPLACED

Having finished my most recent pair of socks, that meant it was time to put in a bit more effort on my long-term project, the Beekeeper’s Quilt~! I loved this pattern from the moment I saw the pictures for it–and I know I am not alone. It has a pretty devoted following and seems to enchant additional knitters every day!

There are a lot of different ways to make this quilt. Some people stuff their hexipuffs. Some use fiberfill, others wool, and others yarn scraps… Some people leave them flat. Some make them single-sided. Some decorate them with embroidery or intarsia or stranded colourwork. Some buy mini-skeins dedicated for hexipuffs. Others use only scrap yarn. Some people trade mini-skeins to increase variety. Some follow the puff directions as written; others modify cast on, cast off, increases, or decreases. Some use sock yarn. Others use heavier- or lighter-weight yarn. There is no one “right” way to make this blanket.

END_OF_DOCUMENT_TOKEN_TO_BE_REPLACED

The green yarn that made the first green hat was ultimately enough for three green hats. I was really glad to use up all of that green yarn–for a little while it started to feel endless, as though I had miles upon miles of green yarn and would be knitting green yarn until I was old and gray. Not having that be the truth filled me with relief. 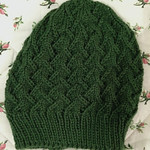 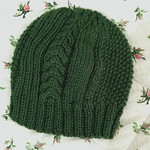 After the hats I focused on a star-shaped blanket made of the yellow acrylic and the blue possibly-acrylic. I toyed with the thought of buying more yellow to make the center yellow star larger, but there was no real need to do so. It was more important to finish it before attending the party at which it would be a gift, so I hopped onto it with the navy blue and crocheted until the yarn was gone. I didn’t manage to get any pictures of it, because it wasn’t even 100% finished drying when we attended the party. Hopefully it will be dragged all over the place by the child who now owns it; that’s the best thing I could hope for a star-shaped blanket. 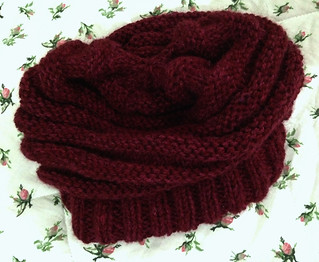 And then, another hat. Hats forever, apparently. At least with this hat, the yarn that was given to me was officially used up~ It’s really lovely and soft, but the yarn was very weak and had been balled with numerous breaks in the yarn. I was constantly stopping and there were so many ends to weave in that I’m glad I did it while I was knitting, instead of waiting until the end. This hat and the green ones are going off to various causes where hats are wanted, but I’ve been delaying on dropping them off at the yarn shop to avoid the temptation of yarn. XD

When I finished the Aran sweater, I only had one ball of that Irish yarn left. After thinking about it for a bit, I knit it into a small cabled tea cozy for one of my 4-cup teapots.

After that, I finally got around to a baby hat that I had agreed to knit for someone back in January… (I do not do much knitting by request, because I don’t seem to actually enjoy it and therefore I procrastinate on it as much as humanly possible. That is exactly what happened here, and the hat only took me a few hours to complete. I always forget how quick some crochet projects are…)