Yesterday I started a new project, instead of working on something that was unfinished. There was a little bit of guilt involved, but not too much, because the project I started will be fairly quick and really ought to have been done much sooner. My little sister really liked the Dragon Watcher’s Hood I made for myself, and requested one in a different colour. I agreed to do so if she purchased the yarn. This happened in April and I’ve just been the slowest of slowpokes.

This is me, the slowest of all Slowpokes. Crown Princess of keeping yarn for a while and letting other things distract her.

I knew it wouldn’t take me all that long, so I started thinking about it when the weather started to gradually cool off. We’ve had a very long warm season. Even when it was October it really wasn’t chilly enough for hats or mittens, so the demand for a hood didn’t quite pop up. Eventually it started to fluctuate and cool down–at that point a few subtle reminders about the things I promised to make started to flutter my way. I wanted to work on a few other things first, mostly because I had so many things on the needles in various stages of completion, but I knew that I needed to start working on this hood. I considered starting it a few weeks ago, but I realized that my size 15 circular needle tips were on loan to a friend. I could have started it on straights, but that didn’t seem worth it.

My needle tips were requested and returned to me earlier this week, so I took advantage of that to begin this project last night. This is a really nice pattern–very simple to understand and involving a lot of repetitive knitting. I find it kind of soothing to work on. After knitting stitches together for the i-cord channel, it’s not very important to pay close attention. There are decreases for shaping, but they fit nicely into the rhythm of the work. I made pretty good progress yesterday, which I looked forward to sharing on Instagram… but black yarn at night really looks lacking in pictures. Oh well! 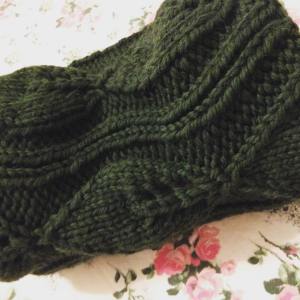 (Also, I managed a bonus finished object! I wrapped it up just the day before–a WIP that had been lingering since July of 2014… yikes! I bought more yarn in early October, and at the beginning of November made progress to wrap it up! There was a moment where I thought I’d have to buy even more yarn… but I improvised. The original pattern asks you to sew a stuffed pillow to line the muff. Instead, I used a lighter shade of green to knit a second layer behind the leaves. Unfortunately… I ran out of the lighter green about 2/3 of the way through! I contemplated buying another skein of the lighter green, but ultimately I had leftovers of the darker green… just enough to finish the lining. It shows through the yarn overs in the leaves, but it doesn’t look odd because it matches the outer layer. ☆Finally, this is complete!!!☆)