When I finished the Aran sweater, I only had one ball of that Irish yarn left. After thinking about it for a bit, I knit it into a small cabled tea cozy for one of my 4-cup teapots.

After that, I finally got around to a baby hat that I had agreed to knit for someone back in January… (I do not do much knitting by request, because I don’t seem to actually enjoy it and therefore I procrastinate on it as much as humanly possible. That is exactly what happened here, and the hat only took me a few hours to complete. I always forget how quick some crochet projects are…) 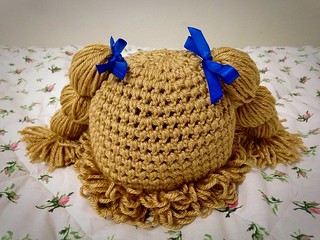 The hat is one of those Cabbage Patch Kids-looking hats, with the loopy fringe and the pigtails. This one was crocheted with light brown per the baby’s grandmother’s request and finished with blue ribbons because I know the mother likes blue. I’m not really a Cabbage Patch Kid fan, but the hat does look shockingly like one of those doll’s hairstyles, so at least as far as what was intended it is a success.

Unfortunately, the pattern did not use up all of the light brown acrylic that I had to buy to make it, so I crocheted a few more projects to avoid having scraps of that yarn lingering around. First, a pair of wristlets using a Tiny Owl Knits pattern “alice in wonderland.” I decided to embellish these wristlets with flowers, and I still had a tad remaining of the Madelinetosh A.S.A.P. that I had used for the Rapunzel hat. I crocheted a flower with it following a Drops pattern… but ultimately it was so large that it’s a brooch on its own. Thankfully, I had some small flowers my mother had crocheted years ago. They looked just right on the wristlets. I’m not sure yet who the wristlets will be for. They’re a little smaller than I really intended. (I’m hoping that my mother has a friend with a little girl who might like them.)

That wasn’t even enough to use up the rest of that light brown acrylic! So… I made coasters. I drink tea all the time, both at home and at work, and coasters are handy. Also, if I spill tea this colour will make it really hard to notice any stains.

After that, I took out some of the Rowan Big Wool… it was time for a Dragon Watcher’s Hood! I am sooooooooo glad that I bought the Woodland Knits book; I love it so much~ ♥

For this project I used the light blue. It was really quick and really satisfying. 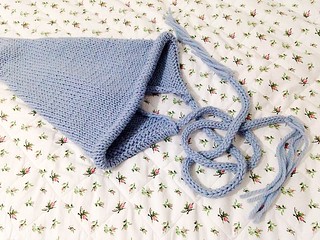 I didn’t have the right size DPNs for the i-cord, so I actually knit it on straight needles. There’s a lot of sliding back and forth to do this, but at the time I didn’t have much else to work on and I was really determined to continue. My i-cord was initially longer than the length the pattern wants, but that was too long for me. Even the length that the pattern specifies was too long for me. When I wore the hood, the cord was dragging on the ground. I wanted it to be long, but I don’t want it to be so long that it gets dirty and gross… and that was before I had added the tassels! This project is almost complete, but not quite… I bought some bells and am waiting for them to arrive so I can add the bells to the cord and the tip of the pointed hood.

After finishing that project, I moved on to the Tiny Violet Hand Puff. (I was able to purchase the angora yarn mentioned in the pattern from someone else on Ravelry, hooray~) I completed the base of the puff and the vines and leaves, all using even more Rowan Big Wool. I didn’t have the yarn to actually make the small flowers, so this is on hold until that yarn arrives. I’m thinking about making my flowers pink and white instead of making violets. I prefer pink to purplish blue~

I used the rest of the angora yarn purchased for that hand puff to make a teeny-tiny baby bonnet. It looks so soft and delicate. I really like the very simple stitch used for the bonnet. It’s easy as pie, but it adds just a hint of texture. A coworker of mine knows someone who is having a baby, so I gave it to her to pass along to them; a total success as far as I am concerned! I hope they like it, but even if they don’t my feelings won’t be hurt.

I planned to continue using up the darker green Rowan Big Wool, as making the leaves and vines didn’t use up an entire ball of it, by putting one of my Jane Austen Knits magazines to good use. There is a leafy muff pattern that looks very cozy, and I know someone who is currently in a “European forest dweller” fashion stylistic phase. A wool muff with a bold leaf pattern would fit right in with their wardrobe and intended wardrobe. Unfortunately, I ran out of yarn before even finishing one of the repeats. (I really should have seen that coming, but I was so hopeful!) I’m going to need to buy more of that yarn before I can continue, but that’s on hold for now. 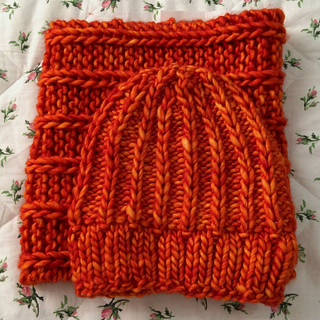 I’ve gotten a jump on Christmas knitting after falling for more Madelinetosh A.S.A.P., this time in a bright orange! I know someone very important to me who loves wearing anything bright and bold, so I converted two skeins of that lovely, soft, and bright Merino into a matching hat and cowl~ Not only was this a quick project, I really love how soft this yarn is. It’s like touching strings of a cloud. I’m glad that the person I’m giving this to is not rough on clothing, because I don’t think it would survive that kind of handling!

Additionally, a friend gave me some yarn that she was destashing. It appears to be an assortment of acrylic bits, some red, some green, some navy, and a mostly-complete mega-roll of bright yellow!

The yellow, being both very vibrant and the rougher sort of acrylic, has been converted into the beginning of a star-shaped crochet blanket. There are a few toddler and baby birthdays coming up in the next few months, so it will probably go towards one of them. It looks like I’ll need to purchase more yellow to make the star a reasonable size, and then I’ll border it in the navy. The navy makes me think of a night sky, and it will definitely emphasize how bright that yellow is.

The green and the red appear destined for hats. My local yarn shops are always taking hats of all sorts and sizes for various organizations, and I love knitting hats! 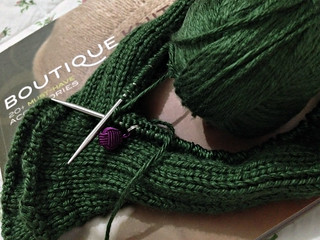 I’ve started one in green that uses a pattern from Boutique Knits for a cloche with a ruffle on the band. I’m really enjoying the pattern. I can’t wait to see how it looks when it’s done! I might make two, haha~!

I’m looking forward to quickly whipping up as many hats as I can so that I can move on to other projects. I’ve got a shawl that I started juuuust a bit of, and some yarn for socks for my husband, and the yarn for the flowers for the hand puff is on its way, but I’m not going to be able to buy the yarn I need to finish the other muff for a while… I have a lot of plans! I’m looking forward to getting back to a more organized spot as far as my knitting and crochet is concerned.