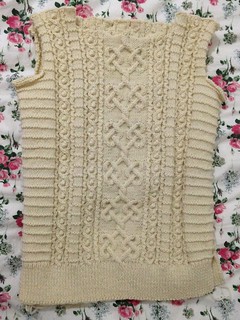 It might seem as though I started an epic cabled sweater and halted, but that is far from the truth. I have been slaving away on the cabled sweater made with Irish yarn for weeks. “Slaving away” implies that it was an unfortunate encounter, but that’s far from the truth. It was a lot of work, but it was work that I really enjoyed. I did not enjoy ripping sections out, but I enjoyed the satisfaction of re-knitting them and seeing the new piece lacking the flaws of the old. It was that kind of project~

This sweater involved a lot of my time because the size just kept seeming kind of strange, no matter how many times I measured and calculated and tested. I held the body pieces up against my torso to test that they were the correct size, and they seemed okay… only to look oddly-sized when laid down.

The sleeves caused me the most trouble–they were simply too wide for my arms per the pattern instructions, and I had a few false starts trying to get a width that made sense for my body.

I stayed dedicated to this project, eagerly watching the skeins of yarn disappear into the pieces of sweater. I started with twenty skeins, and by the time I was done with the front, back, and both sleeves there were less than two remaining in the bag. I’m glad I am not a larger person than I currently am, or I may not have been able to knit an entire sweater with such detailed cables without running out of yarn!

Seaming the sweater together was a bit of a challenge. I haven’t had to do that on something of this size before, and my first attempt looked… really awful. I had to pull that out and try again, but thankfully I did much better the second time around. I tried my best to match up the patterns when seaming, but there are a few that seem a little bit askew. Oh well! On Friday, the entire sweater had been sewn together, and seeing it finally in a wearable state was really, really exciting! ♥ 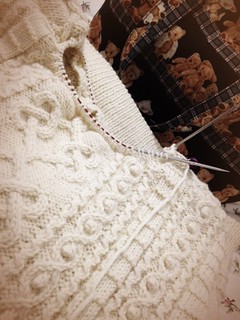 I didn’t follow the pattern instructions as far as the collar goes; I just picked up stitches, decreased, and knit until it felt right. It turned out pretty well this way; the neck was very wide before the collar was added. So wide that my whole body fit easily right through it, and it would NOT stay on my shoulders, haha~ The collar really helped get rid of that problem.

Now it’s finished, and I’m so happy! I wanted to try it on to take pictures… but the weather is not conducive to a thick, heavy, cabled wool sweater. (I slid it on to test that the collar was correct and thought I was going to suffocate. x_x) 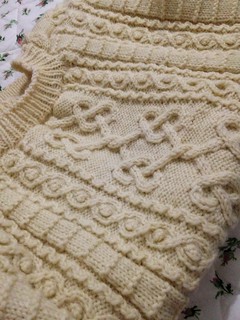 I’m really happy to have finally put that yarn to a good use! I know I’ll appreciate having a sweater like this when the temperatures drop again. ♥ And it’s really fun to know that I made it myself!

2 thoughts on “Conquering the Sweater of Doom”