It’s no surprise that I really adore the patterns from Tiny Owl Knits. I spend a lot of time in the Tiny Owl Knits Group on Ravelry. One of the patterns that caught my eye when it was first released is the adorable Care of Magical Creatures Charm Bracelet (charm pack 1, charm pack 2, and charm pack 3)~ I loved it from the release of the first charm pack–but buying so many different colours of yarn just to knit teeny-tiny charms doesn’t really make sense for me. I don’t have scraps to use, and I don’t like having scraps.

Thankfully, in September 2013 another group member proposed a group order of the suggested yarn, splitting the yardage and the cost among participants. It was an immediate success, with group members signing up and providing their portion of the cost. However, the group organizer suffered from unexpected health issues in November and was unable to continue. Months passed, and I started to think that I had wasted money and would ultimately not receive the yarn for this project. I’ve participated in group orders before, never for yarn, and the risk of getting screwed over has always been pretty high. I kept that in mind when I decided to participate, but it was still not the ideal outcome and definitely not what I was hoping for.

In March, several moderators of the group stepped in–including Ms. Tiny Owl Knits herself! She soon organized a winding party for the mini-skeins, coordinated receiving the yarn from the original organizer, and hosted a night of winding, parceling, packaging, and mailing! I was incredibly surprised and grateful that she decided to step in and ensure that the group order for the yarn was resolved positively. ♥ How frequently does that sort of thing happen??

Just last Thursday I was alerted to a package waiting for me…and it was the yarn~! ♥ 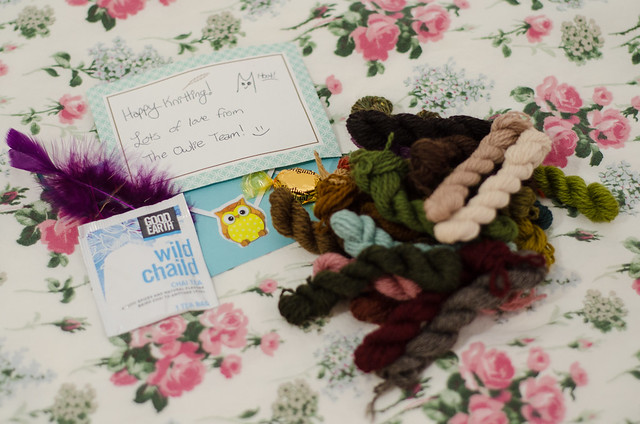 The mini-skeins were tucked together in a plastic resealable sandwich bag, and the card was in an envelope sealed with an owl sticker, with a feather and caramel in the envelope–and along with all of that was a bag of chai~

I’m so happy to have the yarn for this project! I’m not sure when I’ll begin, but I look forward to the charms and all of their little completion tasks~!