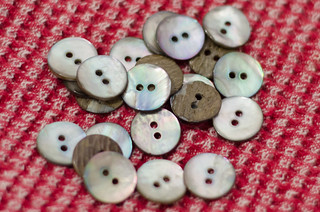 This Wednesday I finished up the doll wrap that I was working on~! ♥ The buttons that I ordered arrived during the day, and I spent the evening sewing them on and adjusting the length of the fringe. The only buttons that I had on hand in the correct size were either standard 4-hole black plastic circles or 2-hole circles of transparent plastic with pink or silver glitter. They were leftovers from other projects, and as much as I really think the glitter buttons are cute, they were too childish for the colour of the yarn and the style of the finished project.

I decided to order dark shell buttons, as I thought they would coordinate well with the colours of the yarn. The Opaline colourway is a really lovely rainbow with a dark brownish-gray over-dye. There’s something similar in the way that shell buttons reflect light with an iridescence. When the buttons arrived I was happy to find that they had exactly the look I was hoping for. 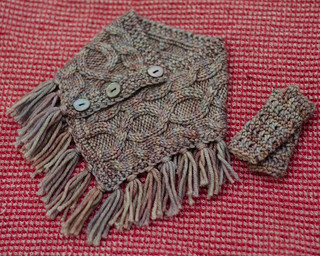 I sewed them on with navy blue thread. I almost used a scrap of yarn to sew them on, but splitting the plies on this yarn results in separate pieces that don’t seem to be the same colour as the original–due to the way the yarn is dyed–and I wasn’t sure that I had a long enough length to sew the buttons on securely. I have a really weird and random assortment of thread colours, and the navy blue looked less eye-catching than the other options.

Unfortunately, when I was sewing the buttons on I realized that my buttonholes aren’t 100% even. The middle button should have been shifted slightly to the right–maybe a single stitch or so. I wasn’t up for unraveling the project to correct that specific section. It isn’t distracting enough to be anything more than a slight annoyance for me. No one else has noticed unless I pointedly call it out. I also trimmed the fringe to adjust any unevenness in length.

I took a moment to try it on a doll to see how the size seems and how the fit looks. I’m really satisfied. It’s very close to the original inspiration picture, which I shared in an earlier post about this project. The little arm warmers look well with the wrap, too~ (I had to remove her hands, slide the arm warmers on her arms, reattach her hands, and then ease them up over her fingers. Due to the splayed position of her fingers, I couldn’t slip the entire arm warmer over her fingers from the tips.) 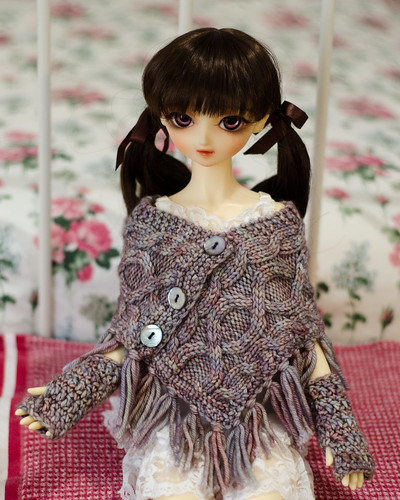