Wednesday was a few days ago, but I didn’t have time to write it up until today–there’s always going to be a delay for me. I do my knitting in the evenings after work, after all, and I really don’t stay up very late.

Overall, this has been a very productive week for my knitting–much better than last week, at least! Last week was busy for many reasons, and I honestly didn’t get very much knitting done. There were a few evenings where I didn’t knit even a little bit–like last Wednesday, hence no update for that day. Sometimes things just get in the way, after all. Normally this wouldn’t bother me at all; I love to knit, but I don’t want to feel controlled by any of my hobbies. I have enough sources of stress in my life–hobbies are supposed to be fun! ♫

That in mind, I was mostly worried about neglecting my projects because I would really like to complete something for the Tiny Owl Knits Winter Woodland Games 2014. It’s a time-bound event, ending on Monday, February 23, 2014. With so little knitting done the previous week, I was in no shape to actually finish my socks for the snow leopard sock jumping event. This week I buckled down and refocused, and thankfully I’ll be able to make it! ♪

All week I’ve been setting daily knitting goals for myself, and that’s made progress on this second sock really fly off my needles~ ♥ I cast on the second sock on Sunday and finished the ribbing for the cuff. On Monday, the goal was to finish two repeats of the cable for the leg. For a while I thought I’d only make it through one, but in the end there were two complete repeats knit before I went to bed. On Tuesday, the goal was to turn the heel. Wednesday’s goal was the gusset. Thursday’s goal was to finish all the cable repeats for the length of the foot, leaving the toe as Friday’s goal.

Thus on Wednesday, my husband and I queued up a few episodes of Copper on the Kindle Fire and I knit and knit and knit. (We really like watching movies and episodes on the Kindle Fire’s tiny screen. When I received a Kindle Fire as a Christmas gift in 2011, I had no idea what I would do with it. I hadn’t asked for it, and I wasn’t really interested in a tablet. When our computer died in early 2012, we started watching movies and shows on it, and honestly it’s so quick and convenient to prop it up and select something. Even now that we have a computer again, we typically watch things on the less-than-7-inch-screen. I started laughing about it recently when we watched Little Shop of Horrors and heard the lyrics “on our big, enormous twelve inch screen.” When I was a kid and all the televisions were already much bigger than that, it sounded silly. Now that I’m used to watching stuff on a teeny-tiny screen, it’s funny in a different way.) 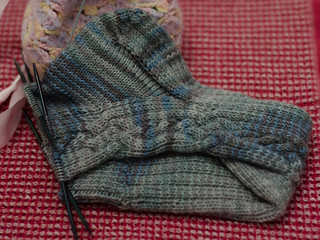 Overall this pattern (Paraphernalia by Taina Anttila) has been a breeze. The cables are easy and beautiful. I’ve got the 32-row repeat memorized now that I’m on the second sock. Turning the heels were effortless, as were all necessary decreases for the toe on the first sock–so I don’t anticipate any trouble with the toe of sock #2.

My husband tried on the first sock when it was almost finished so that I could check the length of the foot before kitchener stitching the toe, and the cables look even better when worn. They stretch in such a way that they look flatter but more pronounced. The knit stitches are less forward, but the purl stitches are more visible. He was very impressed with the cables and the colours. I’m not satisfied with the pooling of the colours myself, but he doesn’t mind at all, so I’m not concerning myself with it.

I look forward to finishing these up soon so that I can submit them for the Winter Woodland Games 2014 finish line~! ★